Earlier this year Guatemala’s President Otto Pérez Molina resigned in the midst of a sweeping corruption scandal. His resignation came just months after Vice President Roxanna Baldetti’s arrest, amidst a slew of other resignations submitted by several key government officials. Molina and members of his administration were accused of bribery, fraud and illicit association.

The scandal erupted just a few months before Guatemala’s 2016 presidential elections; it exhausted the country’s little remaining faith in the electoral process and severely challenged what was left of their trust in the government’s competency at large.

In the wake of Guatemala’s presidential scandal disgust with political process wracked the country. University students and general population marched in Guatemala City and in Quetzaltenango, the second largest (and most politically charged) city in Guatemala, demanding accountability and challenging the country’s facade of political procedure. Demonstrations included a mock-funeral for the electoral process, with coffins full of voting ballots being carried mournfully through city streets. 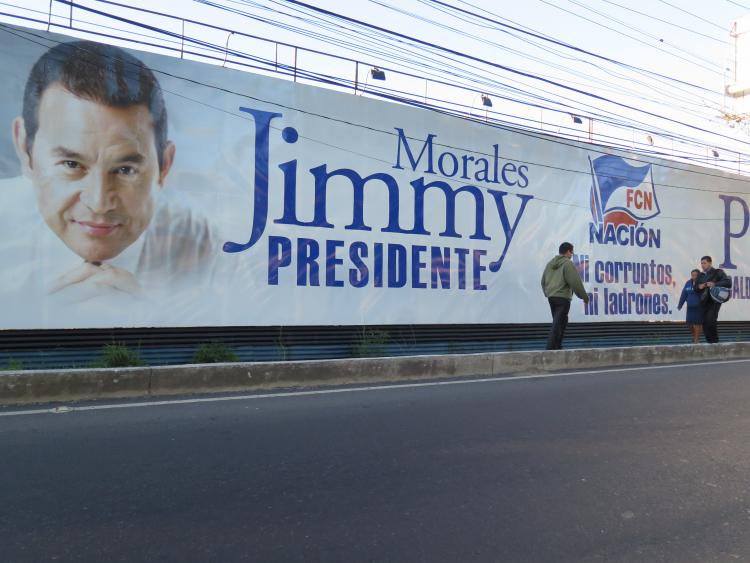 The scope of Guatemala’s government corruption was being brought into bitter focus, and the country’s more than a dozen political parties found themselves vying for any audience at all instead of the luxury of a politically interested majority. Major candidates ran under grasping slogans as straightforward as Ni corruptos, ni ladrones (Neither corrupt, nor gangsters).

The Guatemalan people demanded justice, accountability and change. And rightly so, most would agree.

Why is metaphysics relevant?

Metaphysical philosophy is often criticized for its lack of connection with everyday life. What exactly does studying philosophy have to do with our day-to-day routine? How does examining our own philosophical leanings affect the way we live our lives? Answers to questions like these may not seem forthcoming, and yet they’re precisely philosophy’s raison d’être.

The study of philosophy is nothing else than to search out by reason what is right and proper and by deeds to put it into practice. - Musonius Rufus

The ancient school of Stoicism to which Musonius Rufus belonged is perhaps one of the most action-oriented philosophical schools in history. Stoics certainly theorized about the nature of being, but their priorities were clearly pragmatic. They took pride in exemplifying rational virtues through action, scorned the Sophists who had a reputation for high-flown talk coupled with soft living, and were frequently out of favor with the government and society they criticized - often to the point of exile, imprisonment or execution.

Philosophy has developed considerably in the two thousand or so years since the Stoics, and metaphysics, the expounding of abstract ideas regarding the fundamental how and why of existence, has perhaps taken a larger share of the stage. Even amidst seemingly convoluted metaphysical inquiry, however, philosophy’s end goal of searching out what is right and putting it into practice is never buried too deep beneath the surface.

How is metaphysics tied to current events? Where do philosophy and politics coalesce?

Justice and determinism; an incompatibility

Metaphysical philosophy underscores the complex interplay between our beliefs regarding the nature of the world around us and seemingly self-explanatory concepts like justice or accountability. Something as fundamental as causality, for example, has far-reaching implications that bleed across lines of demarcation between physics, metaphysics, ethics and politics.

Modern Western culture places great emphasis on causality, or the principle that every event (effect) has a definite cause. This principle has proved invaluable to scientific progress; its consistent applicability and reliability ignited an age of scientific inquiry that ushered humankind from horseback to interplanetary spacecraft in the span of three centuries. The idea that any set of identical antecedent conditions must realize identical consequential events pervades Western thought. It’s taught in grade school as corollary to the scientific method, and is emblazoned eo ipso as the definitive mode of examining and understanding the world around us.

If causality is followed to its bitter end, that is, if all things are determined absolutely and unequivocally by their predecessors, we can rightly imagine some first cause or collection of causes which laid out the entire sequence of events in the universe from the beginning of time in a completely predetermined, inflexible fashion. According to this model, the entirety of phenomenal existence is a sort of train steaming steadily along a railway laid down concretely and irrevocably by first causes. Here we encounter the philosophical position of determinism, which introduces us immediately to the problem of free will.

Determinism says [possibilities] exist nowhere, and that necessity on the one hand and impossibility on the other are the sole categories of the real. Possibilities that fail to get realized are, for determinism, pure illusions: they never were possibilities at all. - William James

A deterministic framework is consistent with the physical sciences and with modern Western thought at large, and yet it is in direct contradiction to the idea of free will. If all phenomenal events are predetermined by antecedent events then we, as persons, are in fact unable to actualize possibilities, that is, to decide anything at all. Our internal experience of making decisions, then, would be an ontological illusion, and our observable actions would be a strict necessity adhering to a causal chain of events.

Ideas like justice, accountability and responsibility are thereby robbed of their poignancy in that criminals must commit crimes if all existent events occur from strict necessity alone. Outrage, dissatisfaction, regret and desire for alternate circumstances become feeling and sentiment undergone for their subjective experiential qualities alone. We’re placed squarely into a subjectivist fatalism, ticketed passengers on a rollercoaster fixed firmly to its tracks, hollering and shouting as the cars slide down impossibly steep falls and careen around desperate turns.

Determinism brings us into a sort of deadlock, then, with an active, engaged conception of justice, responsibility and accountability. What are we to do?

Discovering inconsistencies in our metaphysical models drives us to reject, affirm or redefine our conceptions of what the world is, what being in the world means, and what types of conclusions we can draw regarding our own responsibilities, expectations and value systems. An engaged, genuine demand for justice, accountability or even policy change is inconsistent with hardline determinism and casts causality as an incomplete system; in order to reassemble a consistent model of our world and consequently our personal reality, something has to give.

All realities influence our practice and that influence is their meaning for us. I am accustomed to put questions to my classes in this way: In what respects would the world be different if this alternative or that were true? - Wilhelm Ostwald

Changing the way that we think about the world changes the way that we behave in the world. Developing and refining our metaphysical attitudes helps us to achieve greater consistency in our thought and avoid the anxiety and insecurity of cognitive dissonance. A general knowledge of the various consistent metaphysical systems also improves the speed and efficacy with which we can asses the belief systems, motivations and conclusions of our peers - giving us a greater hold on where people are coming from, what they care about and what they’re trying to achieve.

To what degree, and to what end should Otto Pérez Molina & his cronies be held accountable for their crimes against the Guatemalan people? Your answer may be more telling than you know.