In cities throughout Guatemala you’re likely to see children in public spaces selling candy, shining shoes or otherwise scraping out a wage from the whims of passersby. These children are often very young, anywhere from about six years old to thirteen or fourteen. Their goods and services range in cost from $0.13 - $0.65, give or take a little.

If you spend more than a couple of minutes seated in a public area, kids will ask you to buy something. Often they’ll approach in small groups. And they’ll linger, reiterating their requests three, four or five times.

Most tourists, visitors and backpackers will tell you not to buy goods from children. And most don’t. The reasoning goes something like this: When children show a profit from hawking goods on the street, their parents or guardians are more likely to continue putting them on the street to that purpose. That means less (or no) time in school, which is clearly to the detriment of the child.

In short, buying candy from kids (or just giving them money) keeps them out of school.

The other day a friend was spending some time in a café in Antigua, Guatemala, when a child approached her selling chewing gum. She declined the gum but gave the child some money (somewhere around $0.40, worth about nine corn tortillas or two pieces of candy). The child left. Shortly after, a foreign bystander came and sat with my friend. The bystander carefully explained that giving kids money actually disenfranchises them, adding that she’d just arrived from backpacking Southeast Asia where she’d learned that fact.

But it’s vacation time, my friend answered. In fact, in Guatemala, it was a couple of weeks into a 2-3 month winter vacation for all grades. So in this case, how is selling candy on the street keeping kids out of school? 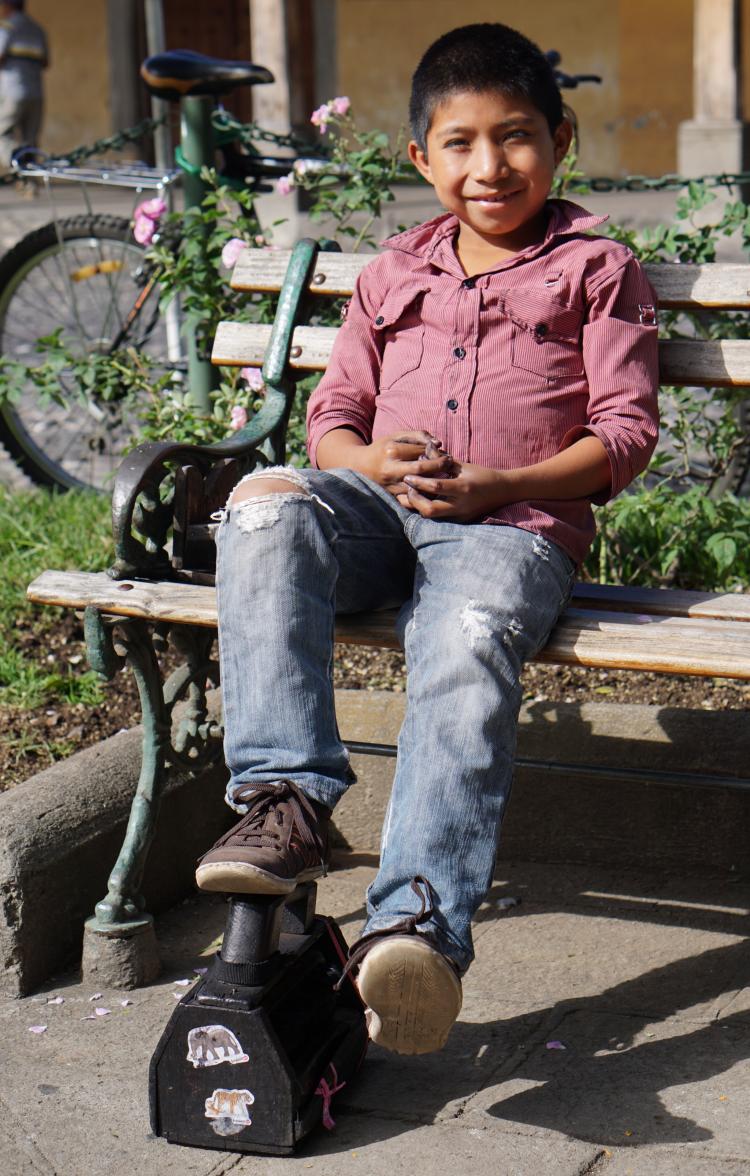 Mario (like super Mario, he says) is ten years old and lives in El Quiché, several hours from Antigua by bus. He’s staying with his eighteen year old brother in an apartment in the outskirts of Antigua. Mario spends the winter vacation in Antigua shining shoes for Q3 ($0.39) per shine. Normally he shines about ten pairs of shoes in a day, but sometimes as many as twenty. The $3 - $8 he makes goes mostly to his brother. He likes shining shoes and spending time in Antigua's central park, but he also likes school. He’s in second grade, and his favorite subject is math.

There are certainly children who are kept out of school by selling goods on the street in Guatemala. There are certainly children who aren’t, too. And, there are an abyss of additional questions one could ask — about Mario, for example. How much money goes to his brother? What does his brother spend it on? Is his brother sharing a vocation with him, or taking advantage of him? Could Mario be doing other more constructive things with his time?

Of course, there are an abyss of questions one could ask about anyone — your neighborhood grocery store clerk, for example; and much to the same effect. Is she spending her salary on alcohol instead of quality food for her kid(s)? Does she play the lottery instead of paying for guitar lessons or swimming lessons? If she couldn’t afford to keep her kid(s), would someone better suited like a grandparent be watching them?

It’s interesting that wondering how we can best interact with others can easily slide into a sort of paternalism. While outright paternalism is often a sign of naivety and ignorance, carefully examining our impacts on others can help us to make decisions that better align with our personal values.

When it comes to the impacts we have on others, how much can we know? And to what degree is it our responsibility to know?

The succinct answer to the eternal question how much can you know?, as Socrates spent a life and death underscoring, is not very much. The limitations of our direct experiences are stark to say the least, and our conceptual knowledge is extremely subjective. Widening our direct experience gives us greater context to make decisions, but it can’t overcome our inherent limitations. Observation, contemplation and exploratory dialogue are all susceptible to bias, hidden motivation, intentional or accidental misrepresentation and simple misunderstanding.

And the result of the whole discussion has been that I know nothing at all. - Socrates to Thrasymachus on Justice & Virtue

Limiting our biases and making informed, rational decisions concerning our behaviors and attitudes in the world requires that we act on our reason instead of reasoning our actions. If we intend our behaviors to achieve specific ends, we’ll observe, plan then execute. If we fear the judgment of others or shrink from the task of realistically weighing our options and their possible outcomes, we’ll rationalize after the fact. Justification rationales (known somewhat derogatorily as apologetics) apply erroneous reason to our actions after the fact, asserting that those actions were grounded in scrutiny instead of self-serving or unexamined motives.

As a tourist, giving money to working children isn’t always pleasant or comfortable. There could be a wide variety of reasons for this. Perhaps we:

Applying simple apologetics such as giving money to working children keeps them out of school is a simple way to rationalize any of the above motives, among others. Apologetics and dogmatics soften the edges of being in the world; they ease the persistent and unforgiving demand for investigation, decisiveness and personal responsibility.

Does that mean it’s best to pay working children? No. It means know your motives and the evidence behind your rationales.

Stand back and watch

Without knowing the concrete ramifications of our actions, it’s impossible to construct an infallible conception of our duty (or the best course of action) in any given scenario. And, in the absence of an infallible conception of duty, what exactly is one to do? This, of course, applies to our example of whether or not to patronize working children in Guatemala, but it also applies to everything else in the world. If we cannot know the ultimate ends of our actions, how do we justify any action at all?

Action - the first thought, or perhaps the first impulse on earth! The barbed hook, baited with the illusions of progress, to bring out of the lightless void the shoals of unnumbered generations! - Joseph Conrad, Victory

In Joseph Conrad’s novel Victory, he explores the aloofness of Axel Heyst, a Swedish sailor, trader & entrepreneur who is intent on avoiding serious engagement with the world at all cost. Axel keeps the world at a distance, neither agreeing nor denying that any particular course of action is, in fact, the best. He travels the world lightly, makes few impressions on his temporary companions, remains unattached, unengaged, uncommitted in any endeavor. Axel is forever living by his father’s dying words: Look on - make no sound.

Spoiler alert. Skip the next paragraph if you haven’t read Victory in the 100 years since its publication and find it's still on your to-read list.

Axel is disappointed in his ambitions of supreme non-commitment. He finds himself bound up in a mortally dangerous situation, to all appearances not at all of his own making, and is forced to struggle (and ultimately to fail) in the face of overwhelmingly difficult and absurd circumstances. Axel chooses to believe that his doom is the result of a specific, arbitrary action of his — a certain decision he made which he vilifies and enshrines as his one foolish mistake and final undoing.

Responsibility as duality: urgent and vague

Assuming we are responsible for our own actions, in a world in which a) we are always acting and b) an infallible conception of duty is impossible, we’re faced with the distressing duality of responsibility. We are called to immediate action both urgently and vaguely.

Thus we’re faced with existential anguish, that is, the knowledge that we’re a) responsible for our actions, b) currently and unceasingly acting and c) unable to know with certainty how best to act.

[Man], once thrown into the world, is responsible for everything he does. - Jean-Paul Sartre

Kierkegaard, for example, was a 19th century Christian thinker who agreed that responsibility in the face of perplexity characterizes the genuine human condition - that is, the result of genuine and active engagement with reality. He was well known for exasperating the church with his radical view that Christianity calls for superhuman effort and persistent uncertainty, or fear and trembling. Kierkegaard’s most cherished example of human anguish was that of the old testament’s Abraham.

God had promised Abraham a prosperous legacy after a lifetime of toiling, in spite of his being childless and with a wife well beyond childbearing age. Abraham waited for years until, beyond all possible hope, his wife bore him a son. Abraham’s son Isaac represented God’s fulfillment of a promise and Abraham’s assurance of a legacy. Isaac was the object of Abraham’s most dedicated love and affection, and a great wellspring of serenity, purpose and a sense of continuity in his old age.

Then God commanded Abraham to sacrifice Isaac, his only son and legacy, as a burnt offering.

Kierkegaard characterizes Abraham’s only possible reaction to God’s command as anguish; a most pressing responsibility in the face of a most confounding perplexity.

Whether it is God or reason that prescribes our attitude towards our circumstances, our engagement with our decisions, our ideals when confronted with being in the world; it is our experience of anguish, of concurrent responsibility and perplexity that are clear signs of our meeting those challenges head-on.

It’s in blanket solutions, apologetics, dogmatics and maxims that we slip into Kierkegaard’s shirked responsibility or Jean-Paul Sartre’s bad faith; by these justifications that we enter into a disingenuous, illusory relationship with the world around us.

To return to the example at hand: There’s no universal prescription for what attitude to adopt toward working children in Guatemala and elsewhere. On the contrary, widely applicable prescriptions for right behavior should always be suspect.

Responsibility dictates that we engage and discover; or dismiss genuinely, owning our dismissal, without sidestepping the ever-present demand to observe available facts, decide in the presence of uncertainty, and execute to the best of our ability.